A closer look at the thought and ingenuity inside the guts of the everyday objects we love, drawing from the past century of very familiar pop culture patents. 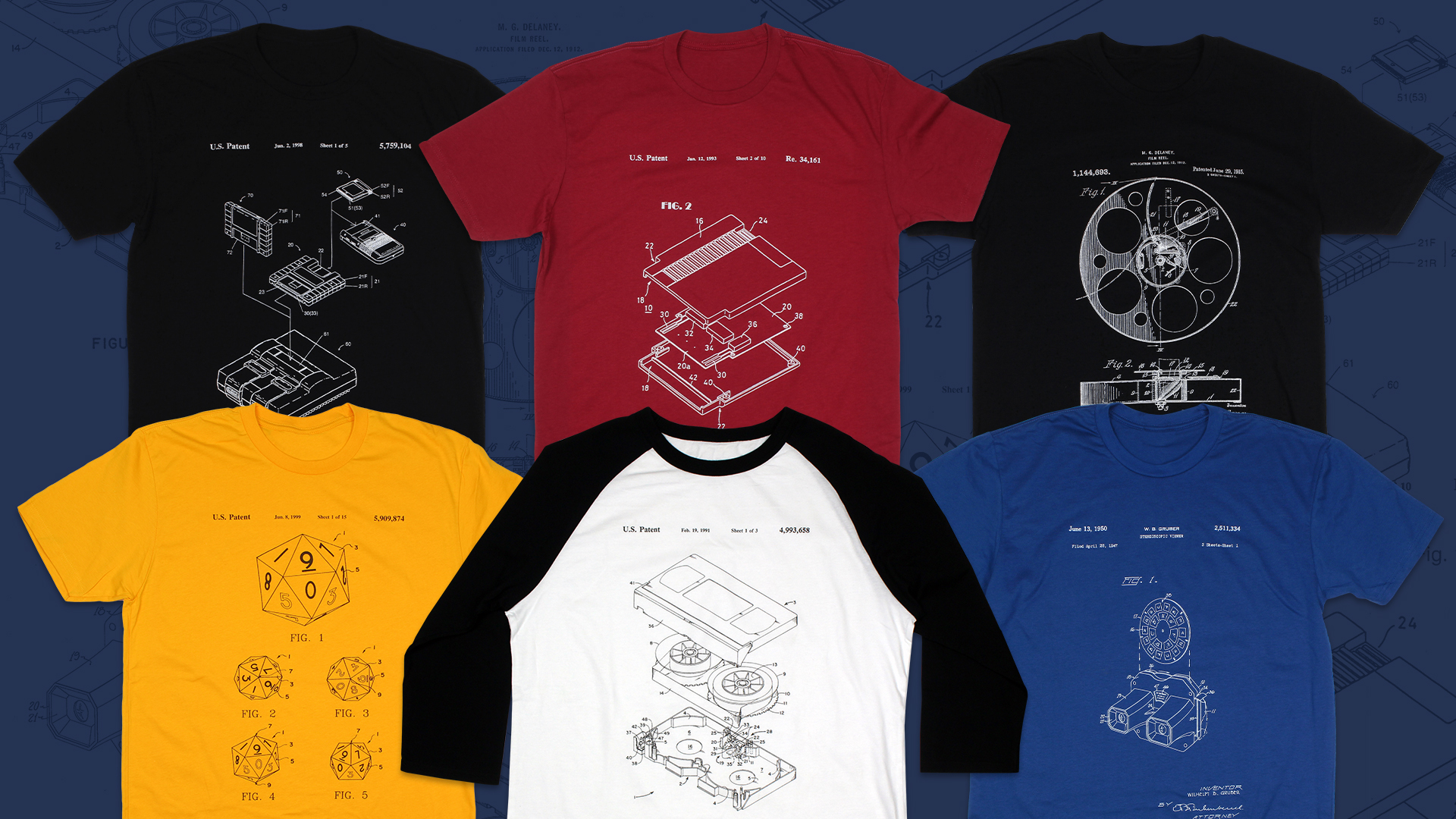 Yes, we are what we consume.

But we're also what we celebrate, nurture, and champion. The objects that surround us drive our creativity and passions, as well as (very critical lately) keep our brains occupied. Each one has a beginning – a spark of genius, a practical purpose, a competitive race – and that's what Alamo Drafthouse and Mondo are celebrating in Pop Culture Trademarks.

Pop Culture Trademarks is our new apparel line that provides a closer look at the thought and ingenuity inside the guts of the everyday objects we love, drawing from the past century of very familiar patent registrations. Here's a look at the tales behind the designs that have shaped our lives.‍

Digital vs. film. Blu-ray vs. HD-DVD. VHS vs. Betamax. Format wars have been a part of film history since the very beginning – the very, very beginning, in fact.

The 4-perforation 35mm standard we know today developed only after a bloody fight between Thomas Edison, William Dickson (one of Edison’s inventors who left to form Biograph), the Lumiere Brothers in France, and many others. Michael Delaney’s patent #US1144693 for a spring-loaded, self-rewinding film reel – shown here – was beautiful and elegant, but alas, did not survive the original format wars.‍

Although second-to-market behind the superior quality Betamax, JVC engineers Yuma Shiraishi and Shizuo Takano fought and eventually won a brutal decade-long format war with an argument grounded in the philosophical stance that fair use and open standards are better for society.

Sony had locked down their earlier Betamax technology, charging licensing fees for anyone wishing to utilize, monetize, or improve upon them. Shiraishi and Takano argued that sharing technology among inventors and competitors without licensing was better for consumers and society at large. On their shoulders, the VHS era was born. Home entertainment would be forever changed.‍

In 1983, video game revenues were $3.2 billion dollars. In just two years, revenues had dropped to $100 million, a 97% drop. Enter Masayuki Yukawa and a team of crack Japanese inventors.

They developed the next generation of video game consoles, featuring a reliable and iconic front-loading cartridge system and a new set of design parameters. By 1988, sales of their cartridges eclipsed the total combined sales of all other home computer software, and Japan was cemented as the dominant force in video game design.

In 1974, visionary game designer Gary Gygax launched the wildly-influential Dungeons and Dragons at Gencon, the fantasy and tabletop gaming convention he founded six years prior. As part of the design, Gygax re-introduced a die that has existed since Roman times – the icosahedron – or, the 20-sided die.

Given its long history, a trip to the patent office never crossed Gygax’s mind. The patent was eventually filed on Aug. 12, 1997, under the dubious claim that it would aid the operation of state lotteries... but we all know who really earned the kudos.‍

Edwin Meyer was a pharmacist at Owl Drug in Portland, Oregon in 1919. From the drug store, he developed a photo-finishing business. He borrowed money from his dad to head out on his own and quickly became the nation’s largest producer of 2D scenic postcards. Stereoscopic (3D) postcards were a novelty, but the viewers were bulky and awkward.